So you thought the oysters went dormant? Never you fear, this busy grad student is here to update you.

The crowdfunding campaign we ran was successful and helped add $700 to my research budget! I have to sheepishly admit I didn’t as of yet get around to recording my oyster “ted talk” as a busy semester got the best of me, but with the help of my friend and collaberator, Natelle of Natelledrawsstuff.com, we sent out some very cool stickers and postcards.

Though it did come with some challenge, I’ve also been able to accrue a small collection of interviews and am starting to analyze my results. Here’s a little detail on both these aspects:

So what happens next you ask? Now I start to pull out themes and central ideas I see occurring within my interview transcripts and notes. We call this kind of approach qualitative content analysis, and the process of identifying and categorizing themes is referred to as “coding”. I will develop a codebook starting with the ideas I might expect to see based on prior studies, not surprisingly referred to as “expected codes”, and add the concepts that emerge during closer analysis of the interviews or “emergent codes”. Transcripts will be examined several times in order to refine the codebook. I can then start to develop ideas about how these groups may differ or be similar in their perspectives on oysters in the regions.

I will be presenting some preliminary results at upcoming meetings and conferences, but full analysis may take a little time. I may also try to add another interview or two to round out the ideas I’m seeing and to make sure I’m capturing most of the key people within this community. Stay Tuned for additional updates as I get further into this process!

Thanks in part to the generosity of donors to my crowdfunding campaign, I’ve started the process of listening to fishermen and oystermen in St. Augustine and nearby!

In order to capture different ideas and access multiple types of people, I am using a technique commonly called snowball sampling. Every time I interview someone, either formally or informally, I ask them who else I should be talking to. The idea is that eventually there will be enough overlap in the answers you’re getting that you know you are starting to capture the population you’re interested in.  This approach is known to have some drawbacks in that it can be challenging to not talk exclusively to people who think similarly to one another. However, when your target populations are small, this method may be the most effective way of accessing them.

While not giving too much away, I’ll also say that I’m already noticing some common themes in the answers I’m hearing to my questions which is exciting. I’m learning interesting details about what fishermen and oystermen look for in reefs. One of the most enjoyable aspects however, is the extra details that are being shared, the personal history and anecdotes people are peppering in with their responses. The experience of local oyster roasts has been mentioned, with each telling rich in explanation about methods of cooking and cultural significance. Stories about growing up on the local waterways abound as well. This kind of research is affording me a chance to really root around and understand the complexity of ways these groups are identifying with this resource, and I’m excited to have the opportunity.

Keep an eye on my blog for continued updates on all things oyster!

Full disclosure, I was once not the oyster devotee I am now. As a proper native New Englander and marine biologist, I of course was acquainted with them. But it wasn’t until I trekked across the eastern coast of the United States and wound my way down to start a PhD program at the University of Florida with molluscan biologist Shirley Baker, that I began to suspect there was something more salient about my study organism.

In the great assemblage of all the graduate students that ever were, many a person has chosen a dissertation topic out of convenience and as a means to an end. Things may have started out in a similar vein for my own research. Currently it seems oysters are a sexy topic, and ecosystem services – the benefits of nature that directly influence human wellbeing, an even sexier one. But as I began to work on my research I began to realize the uniqueness and gravity of Crassostrea virginica, the American Oyster.

Like most people with a glancing familiarity with oysters, I knew they were filter feeders, making them unknowing proponents of positive water quality in many an estuarine region. Under this premise, I started field research at the Guana Tolomato Matanzas National Estuarine Research Reserve (which we call the GTM NERR for brevity’s sake) in the St. Augustine region of Florida to examine clearance rates of oysters within the system. So far I’m learning interesting lessons that I continue to explore. While the Nature Conservancy posts the following graphic about the filtration capacity of a single oyster, I’d like to provide the caveat that this indicates what an oyster could do, not necessarily what it does do: 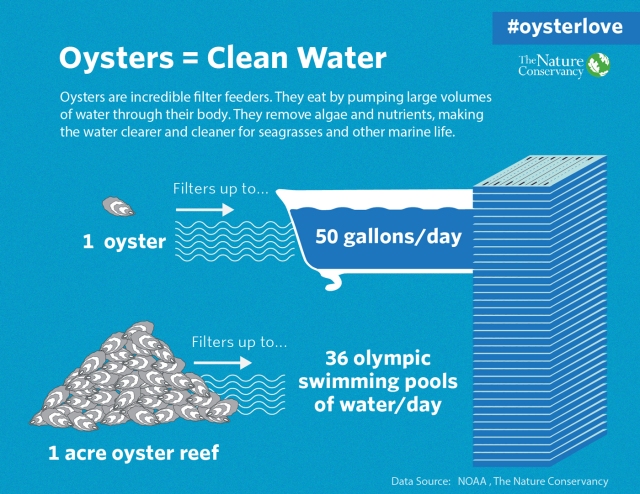 Within the reserve, oyster clearance rates are often lower than lab studies might estimate. But this can often be attributed to the complexities of the natural environment and their influence on the biological processes of organisms. Oysters feeding rates can be influenced by qualities like temperature, salinity, and the nature of the particles in the water they are feeding on. Within the GTM NERR, we’ve also found evidence that tidal cycles may be hugely influential in how much time certain parts of reefs have available to feed.

But while I continue to reveal information on oyster filter feeding within the reserve, I had less initial insight about the full worth of the expansive reefs I was seeing. I did not know how much of a refuge oysters provide until I started to find the squidgy, pinchy little creatures while working on reefs. If you grab a cluster of oysters and rotate it in your hand, you’ll see the craggy irregular patches of barnacles interspersed with often minuscule ribbed mussels hanging on dearly by their byssal threads. Porcelain crabs will flatten themselves against shell in a desperate effort to avoid detection. While collecting oysters, you may also spot sea cucumbers and oyster toadfish while sheepshead and blue crab loiter nearby.

I also didn’t fully appreciate the bastion of strength reefs are against the storms that regularly visit Florida coastlines. It’s suggested oyster reefs have the ability to pace themselves with sea level rise, making them a common and ideal constituent of living shoreline designs which are meant to function as hardier and more effective alternatives to grey infrastructure historically used for shoreline armoring.

The title of my post then refers to the measure of what oysters can teach us about the sometimes unexpected ways we are tied to our environment. But if we attune ourselves to what oysters have to say about the health of our coastlines, we should also listen to one another about the values and concerns we imbue these natural resources with.

In St. Augustine, oysters also provide a source of harvest both directly for oystermen and for fishermen who recognize reefs’ ability to foster good fishing grounds. However, ability to access reefs and to harvest oysters depends on regulation especially in relation to water quality; oysters need to be gathered in locations where they are deemed safe enough to eat. Resource managers are often trying to balance providing positive harvest experiences with optimizing the other services oysters provide.

Information on how fishermen and oystermen currently use reefs, how they would like to use reefs, and how things have changed can then be crucial for the decision making process around managing oysters. We can try and gather those details indirectly or we can talk to these groups directly – a route I am currently tapping into. Through one-on-one interviews, people are telling their stories, revealing vital information about oyster use in the area, and teaching me about the fascinating culture and relevance of oysters within their coastal experiences. I hope study results will lead to more targeted management recommendations and provide opportunities for public outreach, education, and local engagement. Simultaneously, I am quickly learning to embrace my burgeoning love for human dimensions and social science research. All because of oysters. Who would have thought?

If this research interests you, especially my current study on the perception around and use of oyster reefs by oystermen and fishermen, consider donating to my crowdfunding campaign. My friend Natelle, of Natelle Draws Stuff, has designed these amazing postcards and stickers for those who would like some oyster swag: 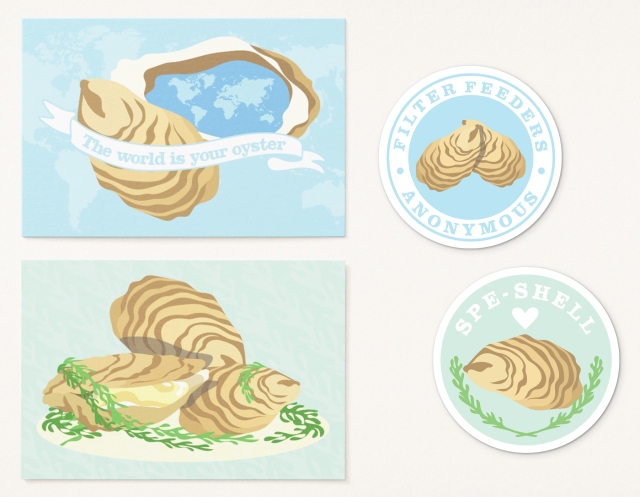 The Venezellos is propped up and displayed down a lonely side street in the Florida Panhandle town of Apalachicola. Online searches reveal little about its past lives, and it’s likely one would have to make a note to ask the local residents to find out much at all.

However, perhaps she has general significance of the fishing legacy Apalachicola and many other coastal Floridian towns share.

While the boat has never been completely repaired/restored, perhaps in order to retain original planking and materials, it’s clearly received a fresh coat or two of paint since 2011 when Grant Blakeney posted the following photo on his blog:

A google search of the name “Venezellos” suggests a spelling correction of Venizelos which is characterized as a Greek surname, one that has been associated with several well known Greek politicians. This finding only seems to deepen the mystery and enigmatic nature of this remarkable nod to the past.